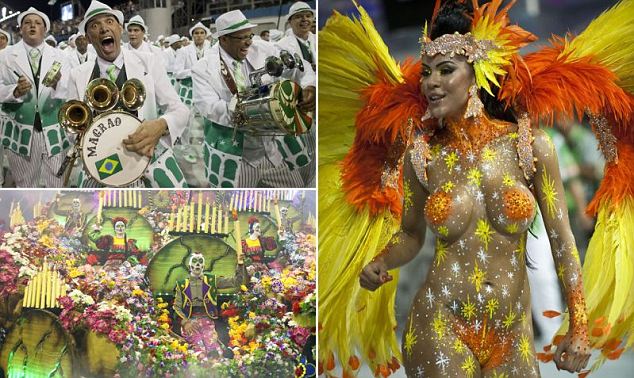 Brazil's Carnival celebrations opened with a bang yesterday at the start of the festivities across the country. Millions of tourists and locals are expected to flock to the visually stunning parades and street parties that showcase samba music and that have come to embody the spirit of the Latin American nation

Brazil's Carnival celebrations opened with a bang yesterday as hundreds of thousands took to the streets to enjoy the start of the country's famous parades and street parties.

Korean popstar Psy, whose "Gangnam Style" single with its signature dance moves has made him a global phenomenon, performed to huge crowds in Salvador, Brazil's third-biggest city, last night.

Other Brazilian and foreign celebrities, including US actress Megan Fox, are flying out to liven up the celebrations in Rio de Janeiro and elsewhere. The five days of street parties, balls and parades traditionally shut down most of Latin America's biggest country, luring millions of locals and tourists to celebrations across the country. Rio alone is expected to attract 900,000 tourists and generate £420 million for the local economy this year.

The different carnivals, which take place in Sao Paulo, Pernambuco, Minas Gerais as well as Rio and Salvador and numerous other cities, each showcase their own type of music such as samba, samba-reggae and funk samba. Last night parades began in Sao Paulo's specially built Sambadrome, a space designed for parades. Got rhythm: a queen of the drums of the Rosas de Ouro samba school performs during the first night of Sao Paulo's Carnival parades Technicolor samba: dancers from the Rosas de Ouro samba school perform in Sao Paulo in the small hours of this morning Dazzle: revellers from the Academicos do Tatuape samba school and the samba school Mancha Verde Special Group join in the first night of carnival parade at Sao Paolo's Sambadrome Fab for a parade: members of the Academicos do Tatuape samba school perform in Sao Paulo while this dancer from the Rosas de Ouro samba school is dwarfed by his float In flight: the samba groups bid to outperform each other, and carnivals in the regions of Brazil showcase different styles of samba linked to their local heritage

The annual event takes place in the days leading up to Lent, the 40-day period before Easter. It began yesterday with the the mayor of Rio de Janeiro symbolically handing over the keys of the city to King Momo, the ceremonial figurehead of Brazil's best-known Carnival celebrations.

But this year's festivities are taking place under the pall of the recent nightclub fire that killed 238 people in the southern city of Santa Maria. Sixty-five others are still hospitalised.

On Thursday evening President Dilma Rousseff attended a mass in honour of the victims of the disaster at the cathedral in Brasilia, the capital.

Her press office said she would not be taking part in this year's events.

Dozens of cities, most of them near where the 27 January nightclub disaster occurred, cancelled or toned down some of their festivities.

Hundreds of nightclubs and other venues remain closed after municipal authorities across the country moved to crack down on lax enforcement of safety codes, one of several factors that investigators say led to the tragedy in Santa Maria.

Gaudencio Torquato, a columnist writing in the Estado de S.Paulo newspaper, this week compared Brazil to a 'see-saw', a country where emotional 'highs and lows relieve each other without interruption'.

In addition, Salvador suffered a power cut on Thursday, which was caused by short circuits after revellers threw Carnival tinsel on power lines. Charge: after the Sao Paulo festivities last night and tonight, parades in Rio kick off on Sunday Weird and wonderful: members of the samba school Rosas de Ouro Special Group at the Sambadrome Energy: carnival marks the run-up to Lent, historically a few days of indulgence before the period of abstinence Come on, boys: the five days of parades, balls and street parties are expected to attract millions of locals and tourists Play to the gallery: the parades take place in the Sambadrome, a specially built space for parades Shout it out: the overwhelming popularity of the carnival events boosts Brazil's economy to the tune of £420 million Walk like an Egyptian: revellers' costumes have become iconic in the way Brazil markets itself to the world