The Art Of Trinidad And Tobago, The Carnival Story...

The Carnival Story - 162 Years Of Mas 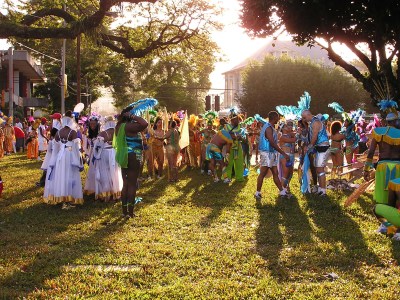 Although a major part of the Trinidad Carnival mystique lies in its unique ability to bring people of diverse backgrounds together in harmonious circumstances, the festival was not born to such noble pursuits.

From the inception of street parades in 1839 and for more than 100 years thereafter, the celebration flowed in two distinctly different social streams - upper and lower classes - occasionally coming to confluence in times of overt patriotism. Curiously enough, that condition was often induced by Britain's wartime adventures.

For the most part, the upper classes held their masked balls in the great houses of sugar estates during the 19th century Carnivals, then mobilized the mas (but maintained their distance), by using the trays of lorries as their stage until well into the 1950s. 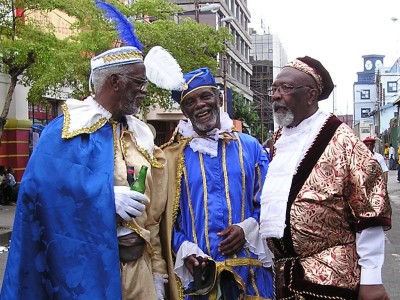 Over the same period, first the free blacks and later emancipated slaves took to the streets on foot with a revelry largely rooted in tribal customs, to which they added parodies of their former masters and a few inventive characterizations. The roots music came from chantuellees, the lead singers, who were composing special songs for their bands from as early as 1785.

During the first 50 years of the 20th century, the Carnival was affected by global and domestic conflict. There were World Wars and local gang riots, but creativity flourished in peacetime. 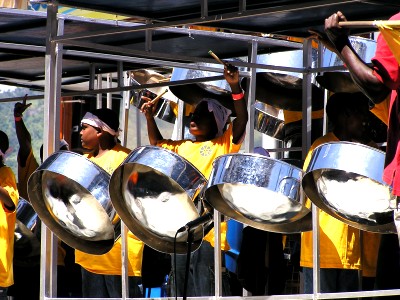 Pan was invented. Early development of the instrument far exceeded the speed of its acceptance across the board. Calypso went international and people actually made their own mas costumes or at least participated in the exercise.

In the second half of that same century, Carnival first rose to a level of extraordinary splendour, then hit a sharp curve. The burst of creativity that came in its glory days radiated from both social groups and was identifiable in every component of the festival. Historical and tribal mas presented educational and aesthetically pleasing images. Pan development enjoyed both diversification and a sense of urgency and calypso chalked up a reprise of its golden age.

However, by the turn of the 1990s, much of the applause earned earlier in the period had subsided, as the festival had undergone a categorical shift of focus, one that clearly pleases the majority, but continues to be a source of bother to more than a few.

Like the rest of the society, Trinidad Carnival had in fact been touched by a number of social and economic realities. The Black Power movement that began at the turn of the 1970s and the boom economy, that followed far too soon to keep reason intact, changed spending habits at all levels. 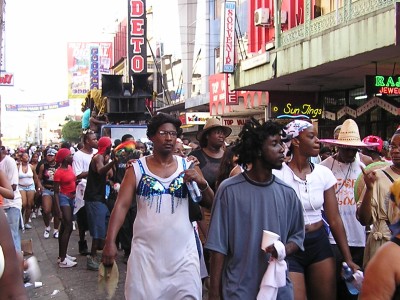 This national windfall, which helped to fund the rise of disc jockeys and music bands of extraordinary amplification, dramatically changed every aspect of the festival too. Its benefits did not however trickle down to the level of pan research and development, stalling the progress that had been made with the instrument up to that time.

In addition, there was women's liberation, the creation of soca, a runaway cost of living, computer-aided design ad marketing of mas bands, production-line manufacture of costumes, the popularity of synthetic fabrics, emergence of the entrepreneurial producers and performers, the effect of radio and television and the fitness craze.

Applied concurrently, these deceptively unrelated components had the capacity to irretrievably alter the form and content of the Carnival. Slowly at first, but completely by the end of the 20th century, the festival changed from a cutting-edge creative crucible, to a market-driven, manufactured commodity. 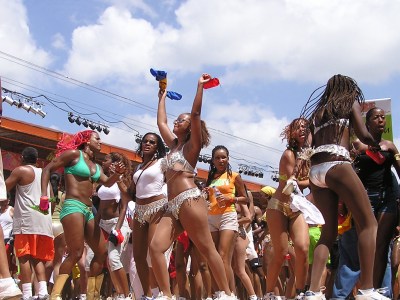 Mas dumped traditional themes and elaborate portrayals, opting for minimal clothing and fantasy presentations. Once an integral part of pre-Carnival fetes and the main parade, pan music was sequentially marginalized. Traditional calypso first gave way to soca, and then lost further ground when the Road March became the most lucrative form of a new genre called "festival music".

The most dramatic shift however took place in the very gender of the masquerade, with women moving from a laughably small minority of the costumed revelers back in the 1950s, to what the National Carnival Bands Association (NCBA) now estimates at fully 85 percent of the annual parade population.

From the lower-class jamettes of the mid-20th century, the streets largely surrendered in the latter-day to the aerobics-oriented lovelies of the middle-class. Consider now that more than 55,000 masqueraders crossed the Queen's Park Savannah stage during the 1999 Carnival.