Bermuda Carnival or #BHW is now in its fourth year and this is the first year Machel has performed at the anticipated event. His presence basically legitimizes our carnival.

He came to the stage performing his 2018 soca hit “Soca Kingdom” to the excitement of the crowd. Despite performing without a band, Machel still churned out the energetic performance he is known world wide for. His DJ for the set was Red Bull 3Style World Champion DJ Puffy – one of the best in the game. 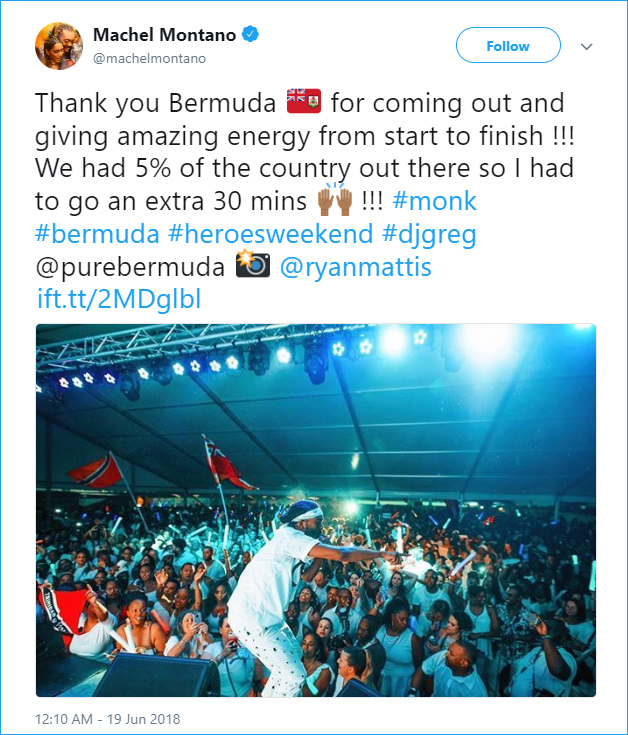 Machel brought a few lucky ladies to the stage to dance with him including one was celebrating her birthday. She flew to Bermuda from Turks and Caicos for the weekend and met Machel on the plane. She was overwhelmed dancing with Machel and it was a sweet moment.

Three other girls came to the stage for a dance off during “Doh Play Dat”.

The King of Soca also performed a reggae set with old school and new dancehall songs.

At 2:30am, Machel finished his set after performing for 90 minutes. Although I thoroughly enjoyed his set, it was much too short. Machel has a large catalog and a true fan like myself knows there were plenty songs he didn’t get to.

Nonetheless, it was an awesome performance. Before he hit the stage, the crowd was entertained by Nailah Blackman who performed a few of her songs including “Sokah”, “O Lawd Oye”, “Bailah Mami” and “Workout” her hit song with Kes. DJ Young Chow from New York performed before her set and was her DJ for her performance.

New Bermudian soca artist J3 also performed her winning song “Feeling For Ya” and for a great reaction from the crowd.

Pure was a great way to kick off the vibe before J’Ouvert, which of course comes right before Parade of Bands. If you weren’t there, you missed a great show. 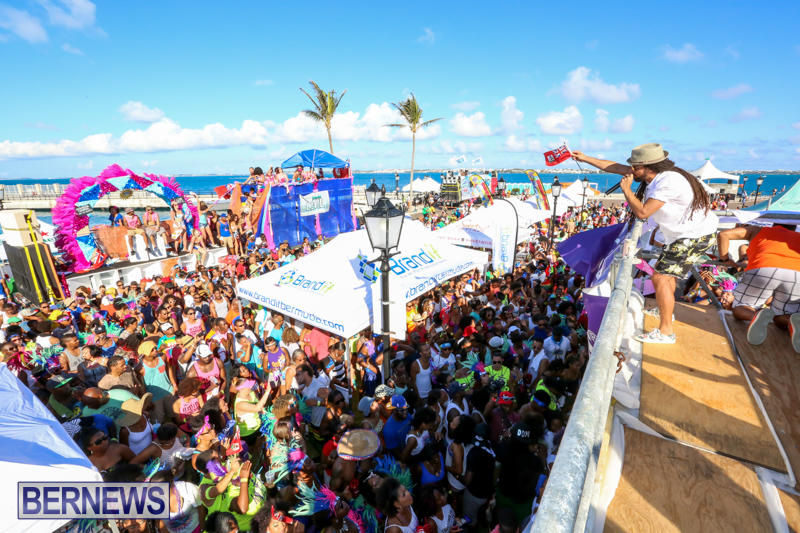 In less than two weeks the BERMUDA HEROES WEEKEND lineup of events will get underway with entertainment available for people of all ages to take part in. There are a number of events on the calendar in addition to the official BHW action.

The Bermuda Heroes Weekend line-up starts with 5 Star Friday on June 15th at City Hall Car Park. On Saturday, June 16th the Raft Up takes place at Shelly Bay from 12 noon. This year sees the Kiddie Carnival combining with Pan In The Park on Sunday, June 17th at Victoria Park.

BHW’s Cirque Du Soca J’Ouvert will take place at Bernard’s Park starting at 3.00am on Monday June 18th. Party People, Nova Mas International, Passion Presents Nirvana, and Code Red are the four bands out on the road for the Parade of Bands which gets underway at 10.00am on Monday and leads in to the BHW team’s Last Lap at Clearwater Beach. 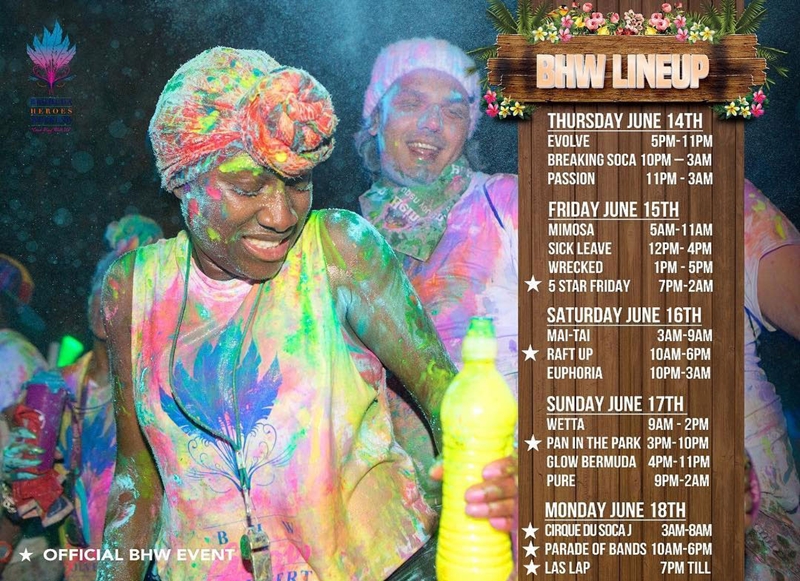 A BHW spokesperson said, “True Carnival people know that it takes multiple elements seamlessly aligning to make a festival spectacular. For a start you need a lively crew and unlimited drinks served with delicious bites like the kind supplied by the Bermuda Pie Company. More importantly, and maybe most importantly, to absolutely enjoy yourself, the events you attend have to be top notch and full of joyous vibes!

“Luckily, from next week, until the last chord is played at Last Lap, the Bermuda Heroes Weekend Team is ready to flex their expertise, and bring you stellar events that showcase exactly why BHW is the fastest growing Carnival in the WORLD! In fact, no matter your age, your interests, or your past experiences, prepare for an unforgettable celebration set in the majestic isle of Bermuda.

“5 Star Friday headlined by Kes The Band and Voice starts things off on June 15th. Doors open at 6PM and we are not stopping until the clock strikes 1AM! It will be held at City Hall Car Park. And you can expect many more talented performers onstage like Nailah Blackman, Shal Marshall, Lyrikal, Kerwin Du Bois and a few surprises to be revealed next week, alongside your favourite local and international DJs.

“Next we are taking you to, Raft Up, an event unique to BHW and the heavenly Bermudian shoreline. This incomparable mix of sun, sea, sand, and soca takes place at Shelly Bay on Saturday, June 16th from 12PM to 6PM. It is the ONLY event where you can party in the waves, on the sand, or out in your boat, with a massive floating sound system. As added incentive, anyone who joins us by boat does so FREE of charge.

“Pan lovers, we have you covered the day after. On June 17th our beloved traditional family day, Kiddie Carnival combined with Pan In The Park! This starts at 3PM and goes until 7PM.

“The event kicks off with a carnival for kids from ages 5 to 12. Then we will be entertained by local steel pan artists, including many skilled youngsters, in the stately and magnificent foliage inside of Victoria Park in Hamilton. Come be a part of the live audience delighting in the enthralling tones of memorable pan music, all for free.

“Few can resist our summons to the next event on our line up. Happening at Bernard’s Park in Hamilton, BHW’s Cirque Du Soca J’Ouvert, is a call to liberate yourself in the moonlight until the break of dawn. This irresistible blend of wicked fun and delectable madness offers patrons 5 different sections to play in. Cirque Du Soca goes from 3AM until 8AM, but is strictly for those 18 years and over.

“This all leads to the final massive parade, which starts at 10AM on Monday June 18th. Where costumed bodies will shine effervescently as they jump and gyrate from Clearwater Beach onwards. Party People, Nova Mas International, Passion Presents Nirvana, and Code Red are the four big bands out on the road for this immense culmination of the festivities.

“And for those who just cannot have enough, the BHW team will host their Last Lap at Clearwater Beach from 2PM until 10PM after the Monday Parade. Join the full team as we all celebrate another successful Carnival in Bermuda.

“Get your crew, and your family together and have a great time this year, at any or all of BHW’s signature events. It is time once again to Come Play With Us for 2018’s Bermuda Heroes Weekend. See you there!”