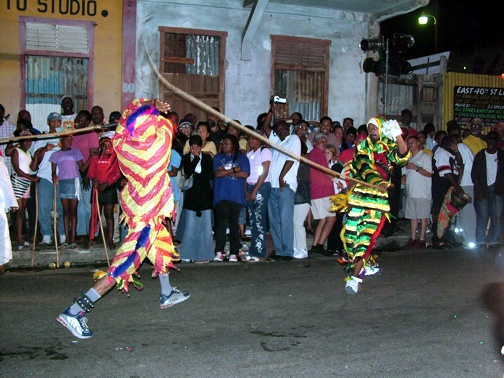 So: a group of armed thugs organise themselves, attack the police, and create chaos because the police stopped them from breaking the law the previous year. The police are held back, and the thugs get off “scotch” free. Then, 122 years later, the act is celebrated as heroism, which some very disturbed people say should be “taught in schools.” (Not to worry: as violence and attacking police go, schools are ahead of the game.)

I refer, of course, to the Canboulay Riots of 1881, which are re-enacted on Piccadilly Street every year before Carnival. It is, say its stagers, the central rite of the Carnival. (Amazing how random people can just pronounce things “central rites” and nobody says nutten, like, “Stop talking that dotishness, nuh.”)

I’m curious. How is a group of thugs attacking police in the streets in 1881 different from a group of thugs in Islamic costume attacking the Parliament in 1990 because they were enraged by the Government? Answer: it’s no different. And, like the Canboulay rioters, some people see the 1990 thugs as heroes, and try to emulate them. Every day.

The perverse re-staging and re-framing of Canboulay introduces an aspect of the study of history unknown to many consumers (and many UWI historians): historiography. This is how history is written, its sources validated, and its narratives interpreted. All this implicates the social, ethnic and emotional logic of the historian and the institutions which authorise him/her.

If the historian/consumer is ethnically obsessed, not very bright, not honest, and emotionally deficient, it leads to a perverse understanding of history, and a confused society.

A clear assessment of the Canboulay riots was provided by the Secretary of State for the Colonies, the Earl of Kimberley: “The governor acted wisely in the crisis in himself calming the mob, but this exhibition of the head of the government begging a riotous mob to desist from violence, if repeated, would destroy the authority of the government, and a mob which has felt its power may not confine itself to Carnival time.”

It wasn’t a mistake the colonial Government repeated. They opened fire on the Hosay rioters in 1884, and the water rioters in 1903. (Even the colonial Government understood the labour marches of 1937 were not criminal but legitimate protests.) Once the evil colonial master departed, the natives botched it. In 1970, they didn’t shoot the army insurgents and in 1990 they didn’t shoot the Muslimeen. The result? Look around. If only we’d listened to the evil white master.

Over the last two weeks, I’ve proposed how Carnival, nationalism, and ethnicity became intertwined in the idea of the newly independent T&T during the 1960s. One consequence of that fusion is a particular way of understanding reality, which, over time, has generated strong dystopian social attitudes, beliefs and practices, which have never been challenged.

A good example is the axiom that “de grassroots” (the criminal, the illiterate, the oppressed) position is always morally superior to the official position found in schoolbooks, law courts, and conventional art and morality. Hence, teach calypso and Canboulay in schools, but not reading and writing.

The major works which seek to establish Carnival as a “national tradition” avail themselves of this assumption—that morality is somehow intrinsic to the lower orders, and absent from the upper. The most authoritative of these works include John Cowley’s Carnival, Canboulay and Calypso, Hollis Liverpool’s Rituals of Power & Rebellion, Milla Riggio’s (edited) collection, Culture in Action.

This notion flourished post-independence, since the institutions designed to inculcate morals, civic values, social cohesiveness and so on were slowly strangled. The last, weak gasp of the moral and social possibilities from pre-independence was the NAR.

With an increasingly attenuated ability to counter Carnival nationalism over the last 50 years, its complex of beliefs and practices seeped into public culture, education, and civic consciousness. Its values are visible in the ubiquitous misanthropy, corruption, malignant libidinousness which is taken for pleasure, narcissism which passes for self-esteem, infantile emotionalism which passes for patriotism, consumerist carnality which passes for mas. These traits are all visible in the Canboulay re-enactment.

Given all this, the question arises: Does history provide an alternative to the Carnival delusion as a source of values and ideas? Ironically, an alternative sits 50 metres away from the Canboulay re-enactment: the Lodge United Brothers temple. It is the first and oldest masonic lodge in Trinidad.

Freemasonry has been in the Caribbean for centuries and in Trinidad since the late 18th century. The vast majority of Trinidadian men of importance (except Eric Williams), from JJ Thomas to HOB Wooding (and including MM Philip, CP David, FEM Hosein, Patrick Solomon) were Freemasons.

Superstitions abound about freemasonry, and it was, like everything else, susceptible to corruption. However, its values were, and are, public service, respect for knowledge, and the brotherhood of all men. Black, white and Indian men fraternised in masonic lodges from c1900.

In addition, there were many friendly societies and fraternal associations with the same objectives, like the Oddfellows, Mechanics, and Gardeners. The lodges bridged class and race divides and had the potential to bring a fractured society together from the top and middle through meaningful rituals, shared knowledge, and consensus about the common good and how to achieve it.

Unfortunately, UWI knows exactly nothing about this, and you won’t find this in any textbook or historical works claiming to explore traditions or cultural history. What you will find is a lot of sloppy, insupportable ethnocentric nonsense. The final question is: how do they get away with it? It has everything to do with those tourists we supposedly love so much.