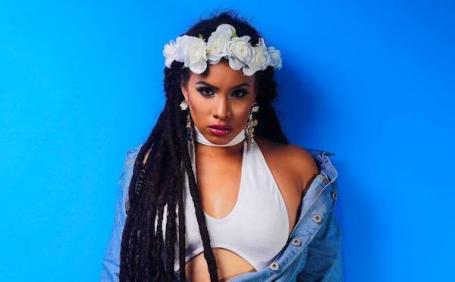 Nessa Preppy has never been shy to embrace her sexuality and certainly caused a stir with the release of Issa Snack, but all is not what it seems as she explained to me on a recent visit to London

Throughout the year in this column I’ve spoken to some of the artists that look like they may have the big songs for the road. Skinny Fabulous, Mr Killa and Fimba are all in my carnival playlist list among others.

This week I speak with another contender – Nessa Preppy. You cannot have been to any soca fete this year and not have heard her monster record Issa Snack.

It’s definitely a ladies’ anthem but not for the reason I actually thought!

Nessa Preppy represents the soca home of Trinidad but was actually born in Germany to a German father and Trinidadian mother. She moved to the twin island paradise when she was only five. The “Trini-Germ” as she calls herself did prove her German side to me with a sentence or two in the language, but faltered at my request of doing it with the Trini accent.

I wasn’t disappointed as I’m sure that would have got me quite dizzy. Nessa only actually learnt how to speak English when she arrived in Trinidad as a young child. She tells me on our catch up in central London: “I came to Trinidad at the tender age of five and fell in love with the culture of the island...the soca, the calypso. I used to enter a lot of calypso competitions when I was a child.”

Nessa’s brand of soca is Ragga Soca, which she stumbled across for the record that started her buzz, Tingo.
She tells me: “It was all about finding what worked for me. I’ve tried stuff like the power soca and the more conventional soca, as people will call it, but when I decided to go different, Tingo everything just popped off.”

Upon meeting Nessa, she seemed cool and chilled, but had a flamboyance that is mirrored on her Instagram channel where she doesn’t seem shy.

“I was always a hot blooded female artist,” she says. “I always like embracing my sexuality, dressing very sexy.
“I think that is just me, you know it’s not for everyone, but that’s just me.”

Even though we live the lives of all our favourite artists through social media, I wanted Nessa to tell me who she is with just a few words. Her response: “Fun, free spirit, Rasta, crazy, controversial girl.”

When I first heard her current soca smash Issa Snack I did think it was controversial. My mind was in the gutter. Nessa laughs when she hears what I thought Snack was all about. Yes, I thought Snack was about oral sex, but was I the only one I ask? Killing herself with laughter.

Nessa replies: “A lot of people think it’s about Nyamming.” We both agreed. Nyamming, as Ms Preppy puts it, is still pretty much a taboo subject within the Caribbean community, but with songs like this and many other soca and dancehall records it seems that that way of thinking for some is becoming less important.

After my misguided thoughts Nessa does put me on to the right track about what the song is about. “What I really sang Snack for was carnival time in Trinidad, when you give a man a wine, you give him a snack and not the full course meal on the road. He then can’t wait till he go home for that!”

Now it all makes sense, but Nessa did say: ”I like the fact that everyone makes up their own interpretation of what Snack is to them.”

She is part of a new generation of music makers in the Caribbean. The ease of making music, collaborating and releasing it to the fans has never been more simple. With this we have seen a rise of so many new names with new sounds that have been brought to the scene.

“I think the new generation of soca artists are doing it so different, the levels are just different with us. Yes, people before us paved the way, but I think we are so hungry for it, that we are going for it and we are going hard,” she says.
Nessa adds: ”I don’t really have a competitive nature, I just believe in doing my own thing, as the saying goes, you can only do you and only you can do as best as you do.”

Nessa is definitely on the rise. She caught the attention of Soca King Machel Montano, who requested to be added to her remix of Snack earlier in the year alongside US dancehall act Hood Celebrity.

I also have some good news for the hungrier carnival revellers behind the trucks on the road in Notting Hill carnival this year.

Nessa will be in the streets handing out a few snacks. She says: “Please remember it’s a snack and not a meal, so you can take your likkle wine but don’t stick!”