Before I begin, I want to clarify that I didn’t go gallivanting through Port-of-Spain in a rhinestoned thong because I care for crazy parties. I don’t. I have narcolepsy (no, not like Carol in Deuce Bigalow, and no, I don’t need water wings when I go out for Pho), so usually I’ll only attend a party if it’s a make-believe one thrown by my REM-cycle. I went to Trinidad because its incongruity with the rest of the West Indies was intriguing. Whereas most islands rely almost entirely on tourism, Trinidad doesn’t do the whole umbrella in your drink thing. Tourism accounts for only eight percent of its GDP, a mere afterthought in the tiny petroleum-rich “America of the Caribbean.” 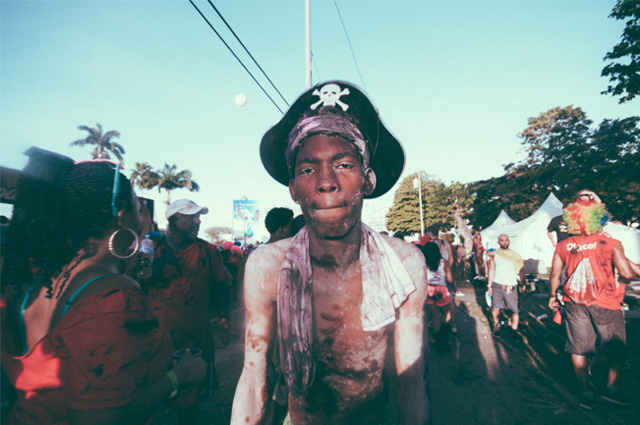 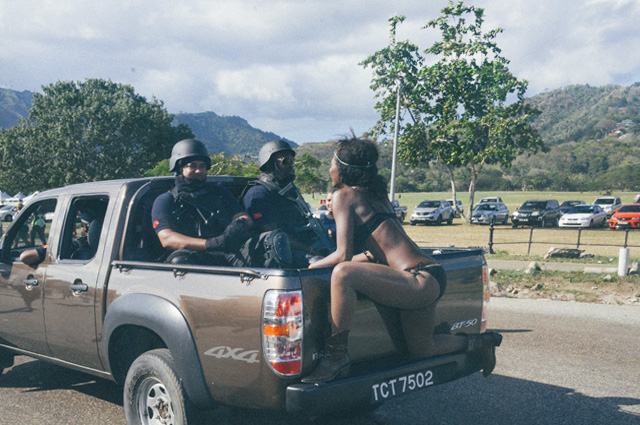 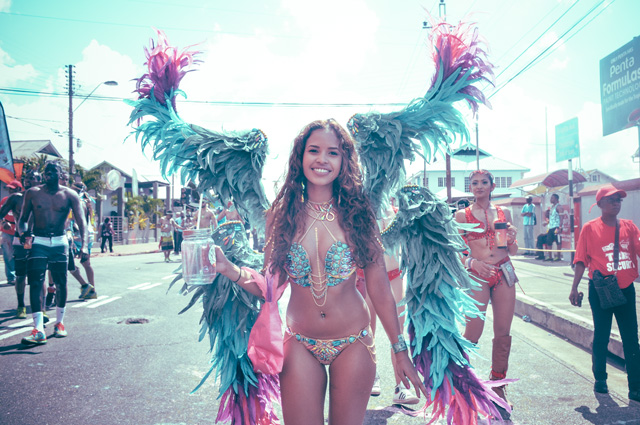 Further deviating from the West Indian archetype, Trinidad’s population is a blend of East Indians, Africans, Asians, and Arabs, who not only coexist, but have completely intermixed to create a sexy accent and an incredibly inclusive culture. Despite these captivating attributes, Trinidad exists in near total anonymity, it’s autonomy stifled by being erroneously typecast as Jamaica’s alter-ego—erroneous because Trinidad and Jamaica are no more synonymous than a seal flipper and my arm. While Bob Marley’s ambassadorship secured Jamaica as the world’s benchmark of West Indian-ness, Trinidad took the role of the quiet guy whose name you can’t quite remember, but, while the popular kids were busy puking up puncheon, this quiet kid was making cold calls from the Caribbean’s basement and he's now a 25-year-old billionaire. Looking back, I should have known not to get personally involved with an enigma like Trinidad. Things never turn out well with those mysterious types, but I was younger then—three weeks ago—and too naive not to answer Carnival’s call.


J’ouvert. All photos by author unless otherwise stated.

From the moment I boarded my flight to Port-of-Spain, I was swept off my feet. The world evolved into the version of itself that John Lennon had always hoped it would: strangers made eye contact, they talked to each other, we were united in Carnival fanaticism. Following my voyage aboard Soul Plane, I hardly had time to wolf down a doubles before the fetting began. By the way, fetting means partying, and it's critical that you know this word before traveling to Trinidad. "Liming” is also useful and should not to be confused with fetting. A fete is a full-blown party with copious amounts of liquor, whereas a lime is not a fruit, but rather an informal gathering for an indefinite period of time. With copious amounts of liquor. To Trinidadians, there are very few things as important as fetting and liming, and to understand why, you must first understand Carnival and how it came to be.

The story begins in the late 1700s when French colonists brought pre-Lenten Carnival (and African slaves) to Trinidad. In the days leading up to Ash Wednesday plantation owners would throw extravagant galas for the rich and racist, and their slaves, who were prohibited from taking part, started holding their own concealed celebrations (which mostly consisted of dressing up and mocking their masters).

After the 1838 emancipation former slaves were finally free to move their Carnival out of backyard barracks, and so they took to the streets to celebrate the end of slavery through singing and dancing. However, in 1881 the British colonial regime broke up their freedom festival with brutal force (that train’s never late) and outlawed African drumming and chanting on the island. Fifty years later, the feisty working-class masqueraders defiantly remobilized, this time as an orchestra of cutlery, garbage can lids, and oil drums, out of which they developed the steelpan—the only non-electronic, acoustic instrument to be invented in the 20th century. The huge factions of former indentured laborers from India, China, and the Middle East, who had been brought over after the abolition of slavery to sustain Trinidad’s commercial growth, also helped to resuscitate the revelry, infusing the festivities with their native folk music.

Carnival, which by this point had nothing to do with preparing for penance, became a consolidation of cultures, and in the early 1960s the indigenous sounds of many a motherland merged to give rise to a single transcendent genre: Soca. Pioneered by composer Garfield Blackman (a.k.a. Lord Shorty, a.k.a. The Love Man who fathered 23 kids), soca’s sound emerged as the ubiquitous voice of the oppressed, but it didn’t cut across social classes until a decade later when calypso legends Lord Kitchener, Mighty Sparrow, and David Rudder infused the genre with its now characteristic provocative lyrics. Sexual innuendo set to syncopated rhythms seduced the masses. 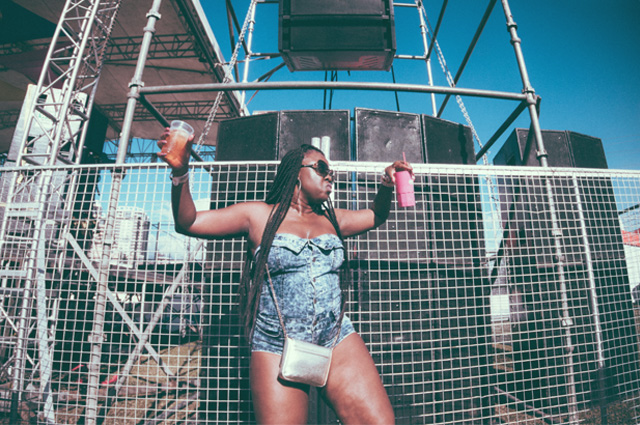 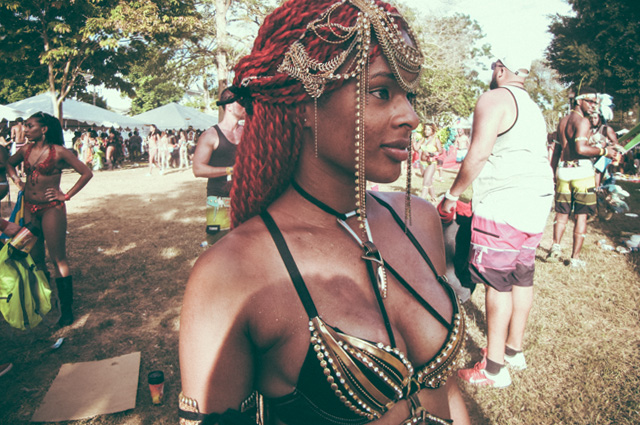 This centuries-in-the-making cultural coup is why, today, Trinidadians have such a flair for partying, or rather fetting and liming.


Carnival Tuesday - On the road with Tribe​. Photo by Mark Romany.

Since I can’t take 55 straight vacation days (nor can I stay awake for that long) I didn’t make it to all the hundreds of fetes, but I got to Trinidad in time for Bacchanal Week, the wildest seven days on the Gregorian calendar. Although I wouldn’t really call them days since daytime and nighttime are irrelevant when you never go to sleep. It’s a narcoleptic’s worst nightmare: a bender of booze cruises, cooler fetes (tailgate parties but with less obesity), street parties that put Brazil’s blocos to shame, DJ sets by Major Lazer, and a surprise show by Machel Montano, who performed not on a stage (that would be too conventional), but at sunrise in the middle of a paint party in the tropical forest. This nationwide bender builds up momentum for five days before coming to a head at 2 AM on Monday morning with J’ouvert, the last fete before I had to face the world in the previously mentioned bejeweled undergarment. 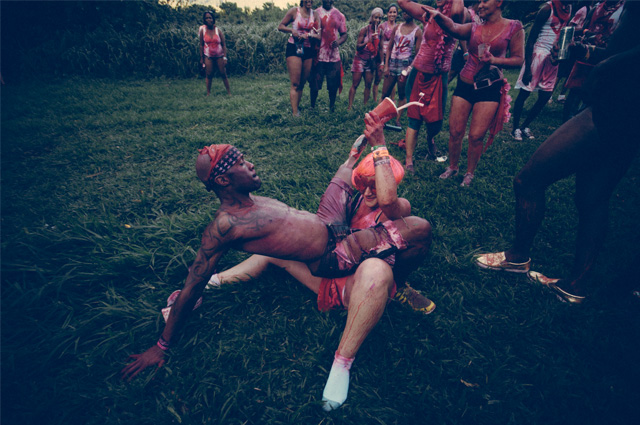 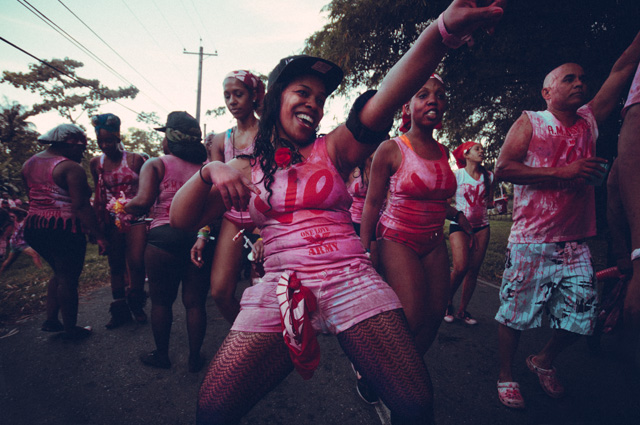 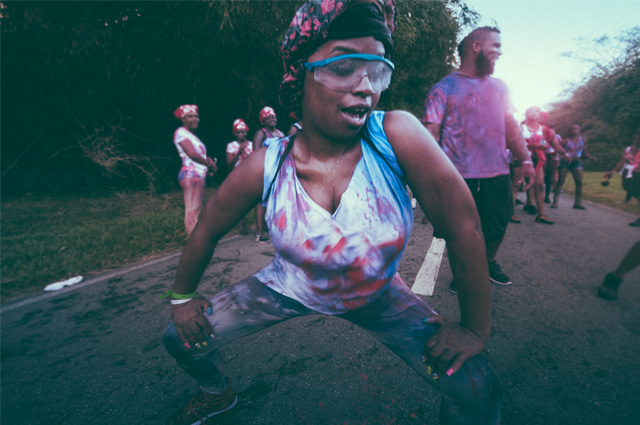 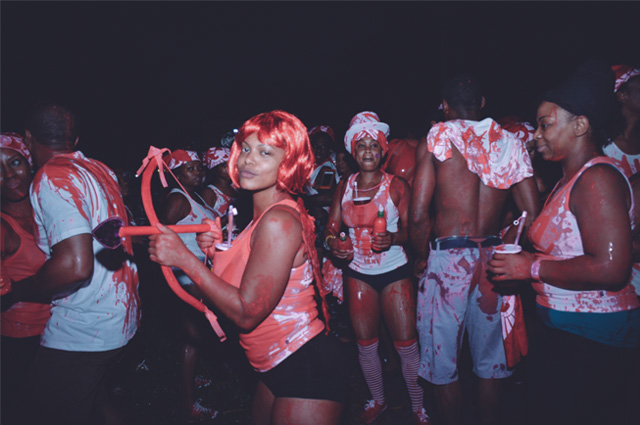 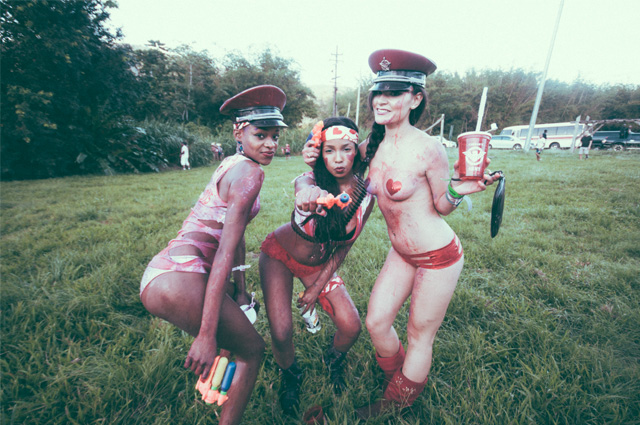 
The easiest way to comprehend J’ouvertis to visualize India’s Holi festival doing P90X on steroids. In the middle of the night tens of thousands of people make a pilgrimage to Port-of-Spain to cloak each other in cocoa, clay, and paint (representing the disintegration of race and class), while foreboding rhythm sections—massive bands made up of only percussion instruments—make the dark streets of featureless people all the more haunting. 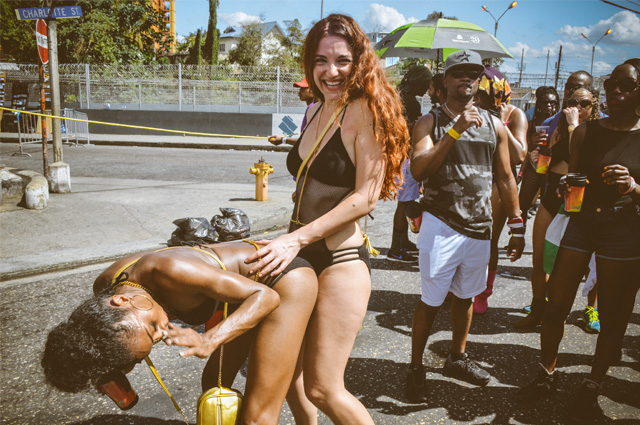 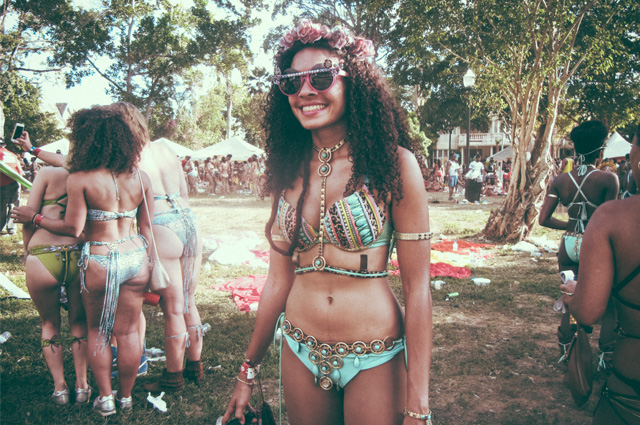 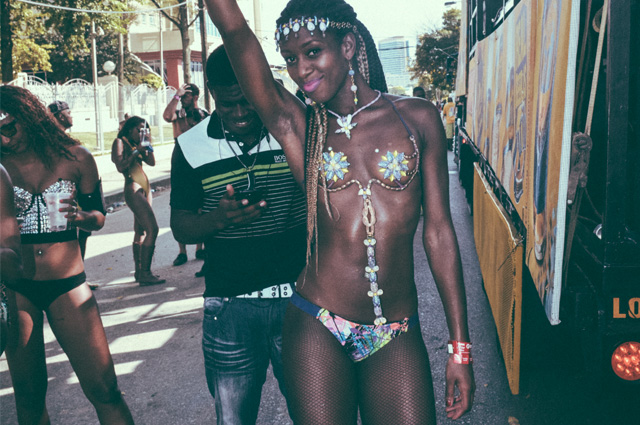 Then, as the sun rises the biggest party of the week begins. We’re not talking a few thousand people in neon crop tops and floral headpieces fist pumping a field. Carnival Monday and Tuesday, the climax of Bacchanal Week, is a pornographic black hole of over-proof booze and naked bodies that makes Mardi Gras look like an Amish Thanksgiving Day parade.

Fiery soca anthems by Olatunji, Farmer Nappy, Fadda Fox and Flipo are blasted out of speakers with subwoofers the size of my living room, causing a cataclysmic shockwave that razes everything in its path except soca trucks (18-wheelers pimped out with said mega-speakers) and wining waistlines:

For a full 48 hours, Trinidad exists in a vacuum devoid of anything but perfect butt cheeks ferociously rammed into a crotches. Even if I raided every sorority house across America I could never amass enough plastic beads to express my amazement at Trinidadians’ total lack of inhibition. The only time I’ve seen people as unrestrained in North America is at the Marriott Courtyard’s free continental breakfast.

Trinidad Carnival is without a doubt the most fun thing you can do on planet Earth and if you have any self-respect you will make the pilgrimage at least once in your life. 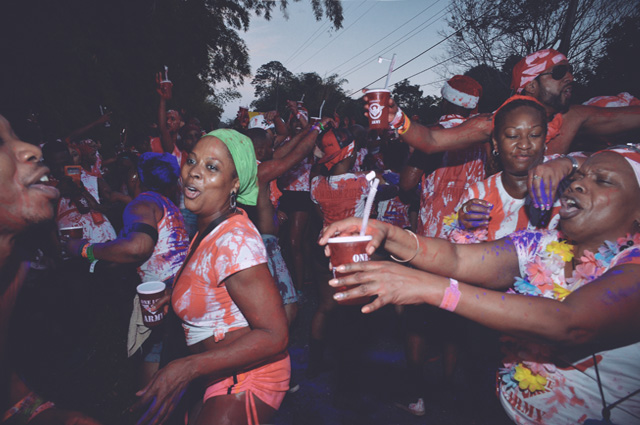 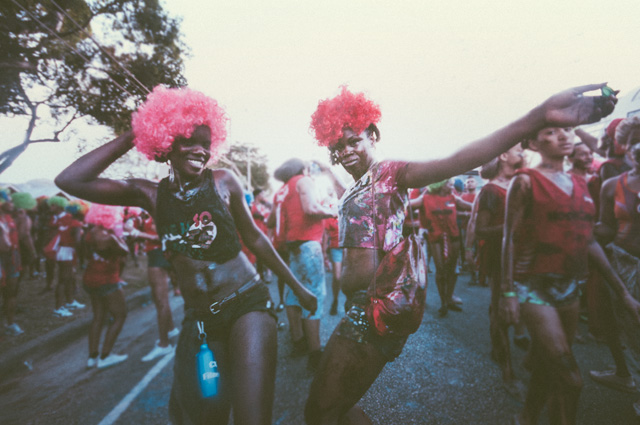 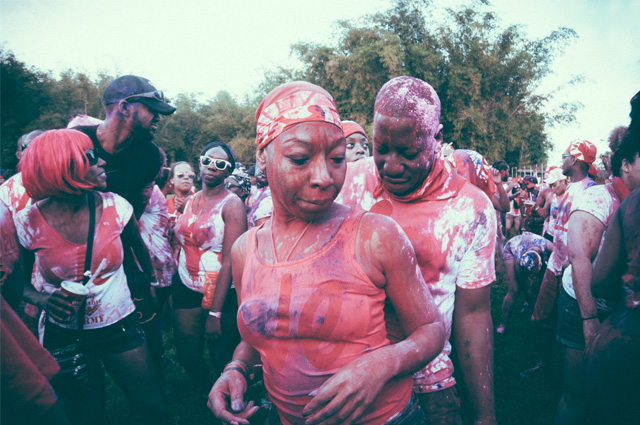 J’ouvert is like Holi on steroids.
Cocao Devils J’ouvert: Revelers coat each other in melted chocolate and party in the streets till sunrise.
Caesar’s Army AMBUSH J’ouvert.

However, the best party on the planet isn’t all rainbows and rum cake, and it’s important you understand that you take a substantial risk by going to Carnival in Trinidad: coping with the Carnival comedown sucks. Where are the support groups? Before I went to Trinidad I found going to a club to be about as fun as an anal fissure, but when I got home the only thing I could focus on was finding my next fete. I finally understood what it must have been like for Garfield to not know when or from whom he would get his next dish of lasagna.

The epidemiology of Post-Carnival Depression, known in Trinidad as Carnival tabanca, is not completely understood, but we do know it is a side-effect of the extreme euphoria experienced by Carnival-goers. The prevalence appears to be highest among residents of North America and Europe, with onset usually occurring upon returning home from Carnival to face the harsh reality that centuries of puritanical bylaws have crippled your culture’s lifeblood like lead poisoning.

Because the rest of the world is and always will be mediocre compared to Carnival, Post-Carnival Depression cannot be cured. But, with the right tools sufferers can go on to live a marginally fulfilling life. If you think that you, or someone you know, may have PCD, bookmark this list of resources and remember help is always just a click away. 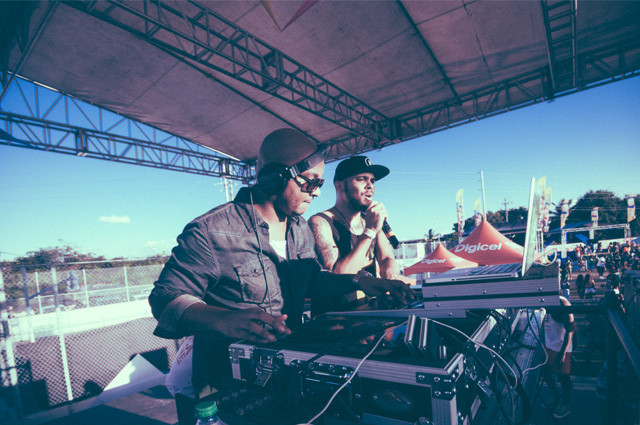 Brooklyn-based Feel Up Records is the brainchild of Chris Leacock, a.k.a. Jillionaire, one-third of Major Lazer, and a fearless leader in the fight against the world soca shortage. His latest work is a remix of Circles, one of Carnival 2015’s s biggest anthems Feel Up offers several mixtapes free of charge as part of their philanthropic Free Ting Fridays initiative, but they do charge a fee to attend their community events, such as the Chicken and Beer tour. The 2015 tour kicks off in Toronto on 5.9 during Canadian Music Week, with subsequent stops in Miami, NYC, LA and more. Exact dates are TBD so follow FeeI Up and Jillionaire for updates.

While not exclusively soca producers, the men of Major Lazer will stop at nothing in making sure the genre attains international celebrity. In creating Sound Bang and It’s A Carnival (above), these activists take us one step closer to world in which every person, no matter where he or she is born, has equitable access to soca.

Additionally, I bullied my pal Jillionaire into making you a playlist of this year’s baddest Carnival chunes. So, press the play button below (and pour one out for print publishing) and let the recovery begin. 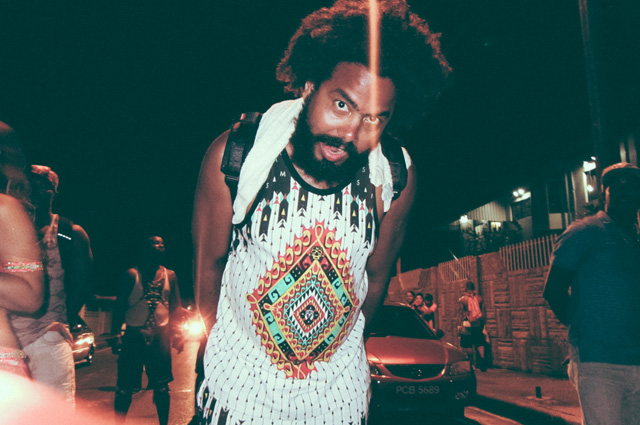 
If you are unable to make it to Trinidad next year, don’t fret. London, Toronto, New York, Miami, Houston, and Washington D.C. all have their own versions of Carnival. Also, Machel Montano will be bringing the bacchanal to LA this with his Epic Mas Band. Even better, Caesar’s Army will be there with him so you can get your AM Bush on. Which ever one you’re headed to, if you’re a Carnival virgin you should probably first read Olympian Rhadi Ferguson's Ultimate Road Ready Guideto get prepared so you don’t kill anyone’s vibe.