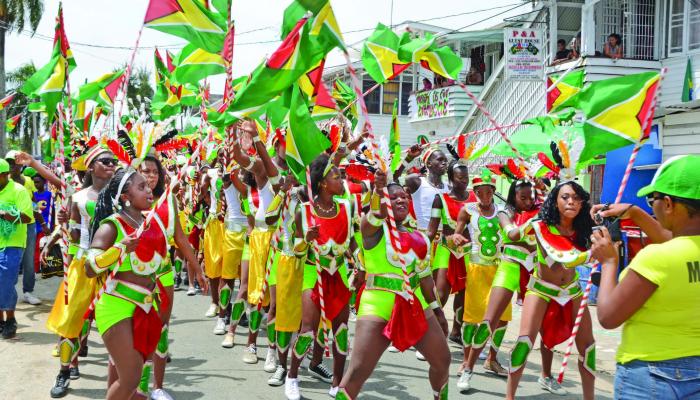 The Guyana Carnival is here. Guyana has now joined other countries in the celebration of carnival, which is both, variously, a long-standing tradition and a new imitative contrivance. All the West Indian islands have a carnival celebrated at different dates in the year – they are all highly colourful masquerades with top-of-the-line entertainment, but in the context of carnival in Guyana there are important conceptual differences.

This is the second carnival revelry that Guyana has borrowed from Trinidad and the Eastern Caribbean in very recent years. The first is J’ouvert. The history and development of these contain major ironies.

What is called J’ouvert in Guyana is a large, popular concert dominated by Trinidadian soca artistes. These were not new to Guyana and have always been held intermittently. They developed with the new name and became entrenched within the past five years, but popular at Mashramani time, and were particularly prominent during Guyana’s Jubilee celebrations in 2016. The name J’ouvert is a feature of the Trinidad carnival. It is a French creole/Patois term derived from the French Jour Ouvert – “opening of the day” and describes the tradition and activities of early in the morning at the beginning of Carnival Monday.

J’ouvert is now the leading feature in the current Guyana Carnival. Three of them were held at Mashramani time 2018, and they are leading the festivities of parties and shows at this time. But while there is deep-rooted cultural tradition in Trinidad and the Eastern Caribbean, there is none in Guyana.

The present Guyana Carnival – sometimes called Guyana Independence Carnival had its origins in the 2016 celebrations of the nation’s Jubilee – 50th Anniversary of Independence. The large road march with its traditional parade of bands was cut from Mashramani Day, February 23 and transplanted to Indepen-dence, May 26.  Now the carnival is full scale and is running over a ten-day period until May 28. It consists of a long series of parties/fetes, stage shows and a parade of carnival costumed bands on the road.

It is endorsed and supported by the government but is intensely driven by private interests. It is widely publicised with running advertisements and hectic promotion. Without a doubt, it appeals to the popular culture and provides prolonged, high-currency entertainment. Even the local soca artistes have put their energies into it and are appearing in some of the shows. There are dubious ambitions of tourist arrivals. Clearly it presents an economic opportunity for a number of interests and enterprises. One cannot predict what it will grow into, but it is following the footsteps of the Jamaica Carnival at Easter time, which became a popular and commercial success.

Nevertheless, it must be acknowledged that the Guyana Carnival is a superficial imitation, however much it is welcomed by the popular culture. It has nothing new and is only thinly based on cultural tradition. There might be no plan to scientifically check airport arrivals or use other strategies to determine actual tourist arrivals for this festival, but expectations of a tourism boost are likely to be unrealistic – at least for this year. It will be interesting to see what unfolds in future years, but prospects could not be bright for an event that simply imitates what is already being offered by almost every West Indian island. Additionally, the Guyana version is considerably scaled down to virtually parties and shows; the islands offer much more.

Along with the great Trinidad celebration (and that in Rio, Brazil) every West Indian island has a carnival. Those that have a Roman Catholic or French historical background are ‘carnival countries’ or are within the carnival belt. They share a historical carnival tradition with a season between January and Ash Wednesday, the beginning of Lent. Trinidad has retained this. Other countries like St Lucia, St Vincent, Dominica, Grenada shifted theirs to either July or August to avoid a clash with Trinidad with whom they could not compete. All their carnivals have the same cultural, historical and traditional roots.

All the other islands are outside of the carnival belt. Antigua-Barbuda and St Kitts-Nevis, however, developed a carnival in August, but these grew from already existing cultural traditions, such as the Christmas masquerades of St Kitts and post-slavery plantation traditions.  Their roots are not shallow. Barbados built Crop-Over in August from strong plantation traditions. There is a carnival in the Bahamas in May which was manufactured as revelry, although the real Bahamian tradition is the Jonkanoo in December-January. Much like what is now happening in Guyana, 28 years ago, Jamaica devised an imitation of carnival which starts on Easter Sunday. That was an initiative from Dragonnaires band leader Byron Lee, who was campaigning successfully in Trinidad carnival, and is quite separate from the Jamaica Festival which celebrates its independence anniversary in August.

But what is the history in Guyana? This country is no different from the entire Caribbean which has a history of carnivalesque traditions. The carnivalesque is not only found in carnival, but it is a tendency to have traditions and revelry based on masquerades, indigenous popular music and costumed bands, even in those countries outside of the carnival belt.

Guyana had an independence carnival in the 1960s. Independence in 1966 was marked with such a carnival staged by the Jaycees. These revelries drew together what was being practiced in the country since before independence. They included steel band, calypso, float parades, the Band of the Year (costumed bands with prizes and titles for the best designers) and street revelry known as “tramping”. There was indeed an old form of a J’ouvert equivalent – “fore-day morning jump-up” with revelers dancing (tramping) behind steel bands on the road.

This was shifted from Georgetown to Linden by the Jaycees. It was that annual event that was transformed and re-shaped into Mashramani as a celebration of Guyana’s Republic Day in 1970.  One of the ironies is that the framers sought to remove the elements of imitation and borrowings from the Trinidad carnival. A number of things were modified, and others included, which they felt were more appropriate for an independent republic in a post-colonial context with its new ‘indigenous’ name Mashramani. Ironically, this has come full circle, and Guyana is now adopting wholesale, the carnival imitation shunned in 1970. The independence carnival has returned.

There are other ironies. The 48-year-old Guyanese festival of Mashramani now seems a bit less privileged on the national scale of priorities than the new borrowed event. In 2016, the Mashramani Day road march with parade of bands which is the peak and the greatest spectacle of the festival was cut out and transplanted in order to build a core for the independence carnival to celebrate the 50th anniversary.

What is more, leading Guyanese singers are now highly visible in carnival 2018, doing commercials and appearing in shows. Tamika Marshall, Kwasi ‘Ace’ Edmundson, Adrian Dutchin, Jumo Primo, Michelle ‘Big Red’ King and Natural Black are foremost in the local industry but were missing from Mashramani. Even those who used to compete for the Mashramani Soca Monarchy no longer do so. It is as if they do not see it as important to their careers, their popularity, their achievement ambitions, their financial earnings or their CV to compete in Mashramani. Yet they have not hesitated to be jewels in the crown of the new carnival.

A few years ago, a Soca Monarchy winner failed to turn up to defend his crown. Another made a statement that he was withdrawing from the competition to allow the newer, up-and-coming pretenders to get a chance to win the contest. Obviously, he had arrived. The deepened irony is that these things never happen in the Trinidad carnival now being imitated. Can you imagine the huge scandal and outrage in Trinidad if Machel Montano did not bother to turn up to defend his Soca Crown? No Trinidadian Soca singer, not even the biggest international stars, considers him/herself too great or too big to compete in the carnival competitions each year.

The old veteran of 45-plus years, The Mighty Chalkdust, won the calypso crown in 2018. There was no talk, even from such a legend, of stepping aside for new entrants. There is great pride, sense of achievement and feverish competitive spirit among the best in the field like Fay Ann Lyons, Bunji Garlin, Montano, Destra and others to compete for the carnival championships.

Guyanese do not seem to regard Mashramani as important enough. The authorities did not think it mattered that the Soca Monarchy was dropped for a few years. They did not see it as relevant to maintain consistency and traditions to make the festival work. The high energy now burning to ignite this carnival were damp coals last February at Mashramani time. If all of this fervor is expended on the premier festival each year it would undoubtedly help.

The enthusiasm, the fever, the financial investment now driving this carnival can well be garnered to fuel Mashramani. The greatness emblazoned in the Trinidad carnival is what Guyana now seeks to reproduce in a fairly superficial fashion. But Trinidad allowed its carnival to grow through many decades of turmoil and struggle to evolve to its present throne of grandeur, while Guyana puts its own tradition in peril in order to glorify and build a borrowed one.