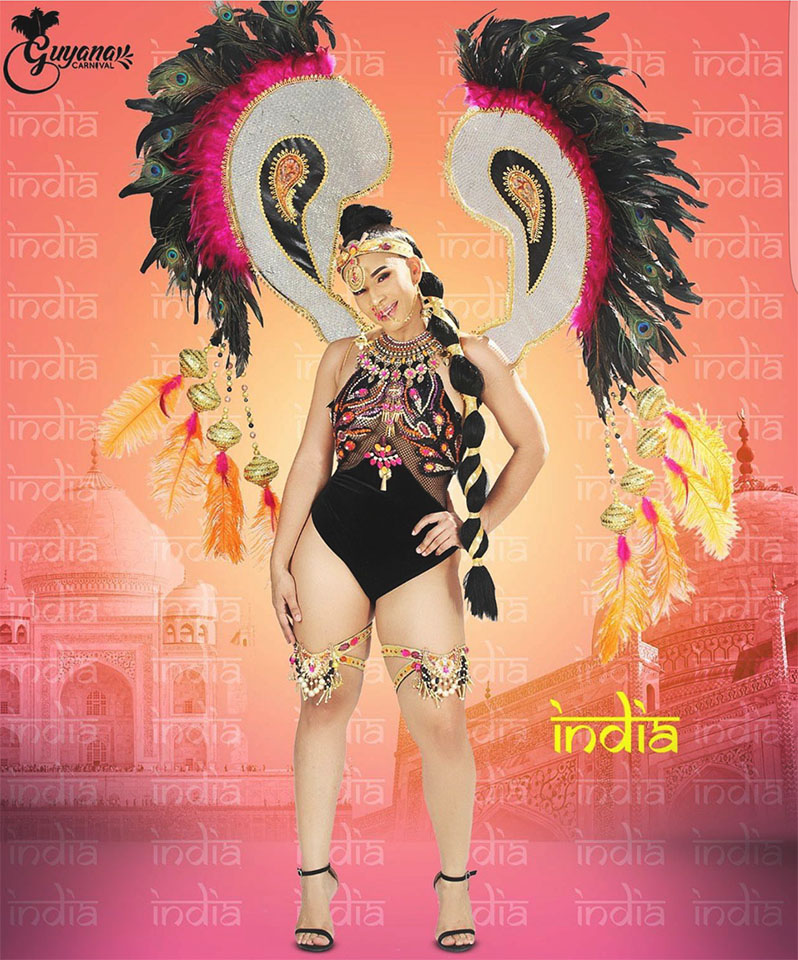 Guyana Carnival 2020 was officially launched on Sunday evening, with a preview of costumes highlighting its “Around the World” theme.

The MovieTowne Guyana parking lot came to life as patrons gathered for the event, called “Soca In The Parking Lot,” to view band sections which were themed after various countries. For the year 2020, the carnival celebrations are being promoted with the hashtag “#CarnivOil,” as Guyana expects to benefit from the coming oil wealth in the new year.

Chairman of Guyana Carnival committee Bobby Vieira, who spoke at the launch, told patrons that the committee is pleased to be hosting the event for the third year in a row. Vieira noted that as Guyana celebrates the 50th Republic Anniversary in 2020, the committee has endorsed and supported those celebrations as it plans to work closely with the Department of Culture to celebrate the milestone. “We will also be giving valuable assistance, guidance on all other areas of importance where necessary to all events and activities surrounding the Golden Jubilee of Mashramani,” he said.

Vieira told the audience that the presence of Minister Dr. George Norton at the launch was a testimony to the government’s commitment to ensuring that the festivals are given the greatest support at every level. “Carnival… is not a competitive event nor a suggestive replacement of Mashramani. Instead, it is simply to add another festival to the calendar of events in order to promote tourism, entertainment and the awareness for local persons in the diaspora and visitors to enjoy hand in hand, while we commemorate our anniversary of independence,” Vieira noted.

The chairman then revealed that they will be adding another feature to carnival following discussions with the Mayor of Georgetown: a Georgetown City Week. He added that it will coincide with Carnival Week in Guyana.

“Our first Carnival attracted 15,000 visitors and this year 2019 we attracted 25,000 visitors to Guyana all from around the world and they enjoyed and participated in Carnival,” he said, while emphasising the carnival’s impact on tourism in the country. He went on to say that just like this year, 2020 will see a number of events being hosted leading up to the masquerade and costume parade on May 26th.

Norton, while delivering the feature remarks at the launch, said that all efforts must be made to preserve and promote Guyana’s unique culture and while those efforts are being made, Guyana must be forward thinking and adaptable to change as it celebrates the evolution in integration into the “broader cultural landscape”. He added that while Guyana is situated within the continent of South America, its people should remain conscious of their Caribbean background. “It is in this context that we must position the expression of carnival as a part of the lexicon in our festive landscape, borrowed from our cousins across the waters and not as a replacement of our… true elements that we hold so dear,” Norton said.

“This actively tonight is a seminal moment, an opportunity to structure our festival calendar with a view to provide a range of experiences for Guyanese and visitors alike that spans the entire year and which celebrates varying aspects of our cultural landscape,” he noted.

Models later took to the stage to display costumes from the Unique Costume Band and Genesis Carnival Band in sections “Iceland,” “Thailand,” “Egypt,” “Dubai,” “China,” “India” and “Brazil.” Costumes for the various sections were designed by local, regional and international designers, who included Olympia Small-Sonoram, Randy Madray, Fonrose of Trinidad, and Stronjeh based in New York.

It was stressed that for 2020, designers took the time to specially design costumes fit for all body types. Frontline costumes, which mostly featured large back pieces and wings, male costumes, and backline costumes for each section were displayed.

Subsequently local artistes, including Lil Colwyn and Brandon Harding, performed a string of their soca hits. They were followed by one of the featured artistes, Trinidadian Soca singer Nadia Batson, who seemed to bring the crowd to life with her hits “So Long,” “Catching Feelings” and her most popular new release for 2020, “Fatt.” Fellow Trinidadian singer Patrice Roberts ended the night as she performed a string of her hits, which included “Sweet Fuh Days,” “Big Girl Now” and one of her 2020 soca releases, “Carry On”.