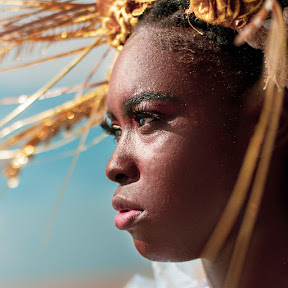 First year student of the Georgetown School of Nursing Faith Corrica is working on learning to heal the physical, but she is already equipped with a voice that soothes the soul. Granddaughter of one of Guyana’s legendary calypsonians, the late Malcolm ‘Lord Canary’ Corrica, Faith has already released a single, “Abide” and plans to drop her album by March of next year.

The album will have 12 songs, all written by Faith, who was 15 when she began writing songs. One she seems to favour is “Forever”, which deals with separate issues faced by and man and a woman. Neither of them is sure of their purpose but they both come to the realization that the only true way to anything is with God. Both parties then decide to let God be the centre of their lives, a decision neither of them regretted.

Although it has only been two years since the teen began singing professionally, she has been making great strides and earlier this year finished second at the Junior Soca Monarch Competition despite being a newcomer. Though her performance attracted a number of fans, it was also the centre of attention for church members who did not think that a member of their church should be singing anything but gospel, especially with her mother being the pastor of the church.

Faith shared that more than anyone else, her mother has been her biggest supporter through the good and the bad and said also that while members of her church may have lost faith in her, all that they have said and done had not gone unnoticed and she intends now to remain a gospel artiste. The comments impacted her life in such a way, Faith said, that at one time she wanted to leave the church. But she remained steadfast because she knew what was best for her.

Asked whether she plans on doing any other genres, Faith replied in the negative smiling and adding that maybe when she finds her significant other, he may bring out her interest in singing soul.

The album, she related, stemmed from her experience with participating in the Junior Soca Competition and what that led to as it relates to members of her denomination. Her single “Abide”, which was released on November 4, is a direct result of this experience. While her participation in the competition might not be considered a good memory or a path she should have ventured down, for Faith, it was a learning experience which she hopes will be an inspiration to others through her song. More than anything, Faith sees her most important duty as being a messenger of God and if after she is gone, persons remember her for only one thing, then she hopes that would be it.

Faith was three years old when she joined the choir at her church. At the time it was called Open Door Bible Way, but today it is known as Cover the Children Ministries Guyana. As far as she can recall, stage fright was never an issue for her. When she was not giving a stage performance at church, she serenaded the children and teachers from her school at the various school concerts. Faith attended Agricola Nursery, Eccles Primary, Diamond Secondary and North Ruimveldt Multilateral. In addition to singing, Faith also danced but this was reserved for church only. From the age of 10 until she was 16 years old, Faith represented her schools at the Mashramani Calypso Children’s competitions, which she won every year.

While she was popular for her singing, the teen said she was in no way popular generally. Faith let on that she is a naturally talented singer who never did any sort of voice training and while many persons commend her for her distinct voice, she still hopes to do voice training in the future.

“I find a sense of comity in singing. If I’m upset, I would sing and creates a calm atmosphere and I’m okay again, especially with gospel music. I experience a more uplifting sensation, something that I don’t get with any other genre. I’m happier when I’m singing gospel,” the young woman enthused.

With a grandfather who was a leading calypsonian and her father, who sang also, Faith was always surrounded by music. And while these two men played a pivotal role in her life, she has other inspirations. Making the list is Guyanese artist Tennecia Defreitas and international performers like Tasha Cobbs, Kierra Sheard, Jekalyn Carr, Tamela Mann, Donnie McClurkin and Rihanna. Her favourite of these is Tasha Cobbs as she believes that her range is similar.

Since she took up singing, the talented singer has performed at more than ten concerts which has seen her visiting parts of Guyana including Bartica, Mahdia and Berbice. Music she noted has benefited her, making her become a disciplined individual and has created networking for her almost every time she steps onstage.

Asked where she saw herself in a decade’s time, Faith quickly said she hoped to be Chief Financial Officer of a recording label as well as a nursing assistant/midwife and happily married with a family of her own. By this time Faith hopes to already have her songs hitting number one on the Caribbean charts and making a mark on the world at large. And hopefully this does not take half as long as Faith also wants to learn to play the keyboard.

She is well on her way to making her dreams a reality, and noted that this would not be impossible as she has the best team: “my mother, my relatives from both my maternal and paternal sides, my colleagues, my producer and manager Joshua Timothy Nedd of Prodi_jay Productions, my father as well, the steel pan band and string band from the National School of Music and my church family of course.”

Faith said that had her grandfather been alive, he would have been added to this list. He was the bishop of their church. Sometimes she still has a hard time coming to grips with the idea that he is no more. “He wasn’t just my grandfather, he was also my pastor, so when I was going wrong, he would call me aside and tell me I was going wrong. I went everywhere with him. When he passed it was just at the beginning of me taking up singing professionally,” she said.

Being full-time student, an ardent church goer and a singer/songwriter, when this simple and easy-going Aquarius has some time to spare, she likes to spend it sleeping. But when she can indulge in hobbies, she likes singing or dancing, writing and reading romance novels. She also likes to spend time with friends.

Her favourite colour is black and her all-time favourite dish to have is pizza, specifically barbecue chicken and chicken Hawaiian.

All recordings of her songs are done at Paradigm Audio Lab by Vijay Deolall.