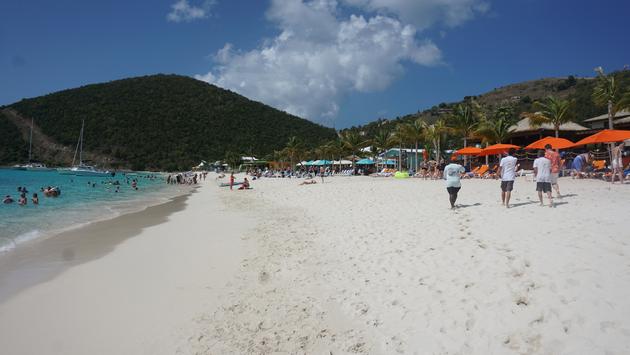 A single day provides plenty of time for a hike in Sage Mountain National Park or some Road Town shopping and sightseeing. But all these years I could never truthfully say I knew very much about the BVI.

That changed this past week: I joined a small group of reporters for a four-night journey through the BVI’s 50-plus islands and cays hosted by the British Virgin Islands Tourist Board. And unlike my first BVI exposures, this time I traveled in a manner befitting the “sailing capital of the Caribbean.”

Our trip focused on the launch of Food Fête, a month-long, territory-wide culinary festival now in its sixth year.

Implemented by Sharon Flax Brutus, the British Virgin Islands Tourist Board’s director, the increasingly popular foodie festival is the territory’s premier promotional event and a terrific opportunity for foodies to experience one of the Caribbean’s under-appreciated destinations.

Flax Brutus describes Food Fête as “the future of BVI culinary” for its focus on creative dishes infused with Caribbean flavor and local, Caribbean-born and international chefs showcasing distinctive fusions.

Now I’m far from a food writer. However, I do enjoy food. Thus I couldn’t help but note the cuisine I encountered during our trip—from the food to wine to the cocktails—was uniformly delicious and representative of the region’s characteristic blend of African, Caribbean and European gastronomy.

Two gatherings highlighted our Food Fête experience, both of which are open to travelers and residents alike. Gourmet Soiree kicked off the month’s events with a night of elegant and “decadent” cuisine at the Scrub Island Resort, Spa & Marina, where our group stayed for one evening before our catamaran excursion.

At the Gourmet Soiree, at which Scrub Island officials also introduced Chloe St-Cyr, the resort’s new executive chef, we dined graciously on fare from award-winning local and international chefs, including Adrianne Calvo and Kerry Heffernan.

During dinner I chatted with young local chef Kevin Jones, whose jerk pork belly tacos have created a local sensation following his return to his home territory after two years in the UK.

The casual foodie festival featured exceptional local restaurant fare and the best dishes from BVI food trucks and vendors of regional delicacies. Visitors paid $25 per person for free run of the numerous food and drink vendors, while live musical entertainment played throughout. It’s a terrific deal.

Personally I enjoyed a unique version of my favorite Caribbean cocktail, a mojito, made with specialty tequila (in place of the traditional rum).

After the drink, I took in one pork belly and johnny cake combo; a slider composed of 40 percent ground beef and 60 percent brisket and topped with wasabi sauce; a magnificent ceviche I still recall; and two slices of sweet potato and coconut pie (as I said, I enjoy food). Then I drank another tequila mojito.

In between the festivals, our group embarked aboard our all-day catamarans tours of BVI resorts and attractions, beginning with Jost Van Dyke, the smallest of the BVI’s four main islands (after Anegada, Tortola and Virgin Gorda).

At White Bay, our group shared tropical libations and fresh seafood at casual beachfront eatery Hendo’s Hideout, and then took a few steps down the beach to the Soggy Dollar for signature “painkiller” rum cocktails.

While some work remains to be done, (the official re-opening is set for April), the island remains extraordinary.

Necker is a combination of a deluxe luxury resort with sumptuous accommodations featuring Balinese-style furnishings; with a dedicated animal reserve for threatened flamingos and lemurs; plus a sports-and-adventure themed getaway with premium tennis facilities and guided kite-surfing in its blue windward waters.

Later we wound around to The Baths National Park on Virgin Gorda’s north shore. We trekked in between and around The Baths’ massive granite boulders at the beach's edge, a frame for endless Instagram posts.

We also toured the Rosewood Little Dix Bay, the historic Laurence Rockefeller luxury property that was also impacted by the 2017 hurricanes. The 80-room resort on 500 lush acres is slated to re-open in January.

At Norman Island, the catamarans anchored near Willy T’s Floating Bar and Restaurant, a former cargo ship converted into a bar reachable only by boat or water taxi. At various points, some of our group jumped off our catamarans into the cooling blue ocean waters for swimming and snorkeling.

Each day we all reveled in the territory’s warm breezes and sunny skies and marveled at the rich blue waters and lush green hillsides we found in nearly every direction.

The four nights seemed to unfold as an extended dream of good food, good weather, good company and good times. Something like four great one-day visits, only infinitely more rich and rewarding.