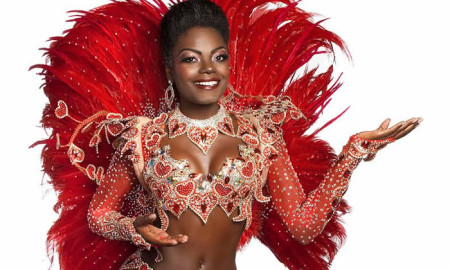 Rio de Janeiro's Carnival is well-known for being a huge cultural celebration that draws in millions of Brazilians and tourists alike, all of whom hope to bask in the exuberance of the massive event. Each year Brazil's biggest television network, Globo, selects a Globeleza carnival queen, who is picked from obscurity andhyper-sexualized to become the star of the entire carnival. In 2013, Nayara Justino, a black Brazilian, was voted by the public to reign as the Globeleza, only to later be dethroned and replaced by a woman with much lighter skin for unknown reasons.
Now, in a new documentary from The Guardian, the 27-year-old is sharing that she thinks she was dismissed as Globeleza for being "too black".
Since 1993, the Globeleza has usually been a woman with fair skin and of mixed Afro-descendants. The winner often becomes a household name, appearing in videos and photos. Justino says in the documentary that she grew up hoping that one day, she too, would hold the title.
“Brazilian TV’s carnival queen has always been light-skinned. But that didn’t stop me from applying when Globo held the first public competition to find a new carnival queen in 2013,” Justino says in the documentary. But her eventual win was short-lived once videos and photos of her as the new Globeleza went public.
"Lots of people were talking about the color of her skin because she was black and there had never been a black Globeleza before," Rayla Souza, a friend of Justino, says in the documentary.
"People came on my Facebook page, calling me 'monkey' and 'darkie,'" Justino says. There was a tremendous backlash from both white and black Brazilians.
"It was the racism that hurt me most of all. And the racism wasn't just from white people, it came from black people, too," Justino says of the negative commentary she received.
A few days after the public's harsh reaction, she says that she was thanked by Globo for her contribution and terminated from the role. Soon after, she was replaced without a public vote by a light-skinned woman.
Globo gave a response to The Guardian in regards to its termination of Justino's contract:
Globo does not base its contracts on skin colour. Actors are chosen according to their artistic fitness for the role. The same criteria applies to the choice of Globeleza, where artistic merit prevails.
"I hope to inspire young black girls," Justino told The Huffington Post in regards to why she wanted to do the documentary and the message she hopes to give other young women who watch it. "Never give up."
Justino told HuffPost that as far as the state of race relations today in Brazil goes, "We've still got a long way ahead."