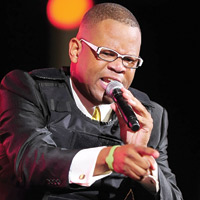 Defending champion Duane O'Connor is confident he will retain his title this evening when the Trinbago Unified Calypsonians Organisation (TUCO) holds its annual National Calypso Monarch final at the Queen's Park Savannah, Port of Spain.

The winner will walk away with a first prize of $1 million. In 2011, the first prize was $2 million—the same for all the major Carnival competitions that year only—following a promise by Prime Minister Kamla Persad-Bissessar.

This is the second time the organisation will be holding the competition out of the Dimanche Gras on Carnival Sunday night. In 1998, Mystic Prowler won the title when TUCO held the competition on its own.

This year, the new competition schedule comes after changes made to Dimanche Gras by the National Carnival Commission (NCC). Tonight's finalists will perform two tunes.

Eleven finalists will challenge O'Connor in an attempt to strip him of his title, but he is quietly smiling, waiting to unleash two new songs titled "Building A Wall" and "Seeking Sparrow's Advice".

O'Connor feels he has seen enough of the competition and is ready to take on all comers.

"I feel good about my songs and I am ready for them; they have to come real good to beat me," said O'Connor

He says he is also very happy the competition is on its own.

"It was always a problem in Dimanche Gras, and the show was always long and boring."

Leading the charge against O'Connor is eight-time monarch Chalkdust (Hollis Liverpool), who will also try to be become the calypsonian who has won the most National Monarch titles.

Chalkdust, who is currently tied with the Mighty Sparrow for the most titles, last claimed the crown in 2009.

This year, he made the final with his song "Virginia's Alzheimer", which he sang at last Saturday's Calypso Fiesta, the semi-final round of the National Monarch competition, at Skinner Park, San Fernando.

Liverpool said of his chances: "I am happy at my age to be among the youths, my grandchildren. I feel like I win already. I thank God for my ability and the opportunity. My chances are as good as any; I will put my best foot forward and do what I have to do at my best."

Two other former monarchs— Karene Asche (2011) and Kurt "The Last Badjohn of Calypso" Allen (2010)— are in the hunt for their second title with "Meh Pardna-Ship" and "Political Sin-Phony", respectively.

Asche said yesterday she feels very confident with her two songs and is very glad to be in the final once again. She says everybody in the final comes out to win and may the best one win.

Allen said, "Team Last Badjohn of Calypso is declaring Thursday as 'Thankful Thursday' as we give thanks for calypso and a night that we can call our own."

Veteran singers Pink Panther (Eric Taylor) and Marvellous Marva are also in the fray with their songs, "Travel Woes" and "Come Back to What", respectively.

Pink Panther said yesterday:"I am feeling good; I like the line-up; there is a good mix of youth, female and veterans. I wish everyone well and hope we put on a good show. My chances are as good as any; there are very good songs in the competition, but I feel it all lies in that second song."

Marvellous Marva said being in the final after singing for 40 years is an achievement.

"I have been knocking on the door for a while and was a reserve for the final on two occasions. This time, I am confident; I know it is the big one but I am taking it as another show, keeping cool, calm and collected. I wish all in the final the best."

Added excitement in the title chase will come from Heather Mac Intosh with "The Old Man's Lament"; Eunice Peters, "None of the Above"; and Kizzie Ruiz, "In the Age of Blog".

Queen Victoria (Victoria Cooper-Khan), "D Betrayal"; and Alana Sinette, "No Moral Authority" are debutantes in the title race and have been receiving very good reviews.

Sinette is confident and she is looking forward to her performances.

"I have been enjoying a successful season. I have two good songs and am focused on the task at hand. I've put in a lot of hard work so I have a very good chance" she said.

The singers will be backed by Errol Ince and the Music Makers.

This year's competition is in honour of The Mighty Shadow, who will make a guest appearance, along with five-time calypso monarch Black Stalin.